Scientists present the “Doomsday Clock”..the greatest approximation to the “disaster” 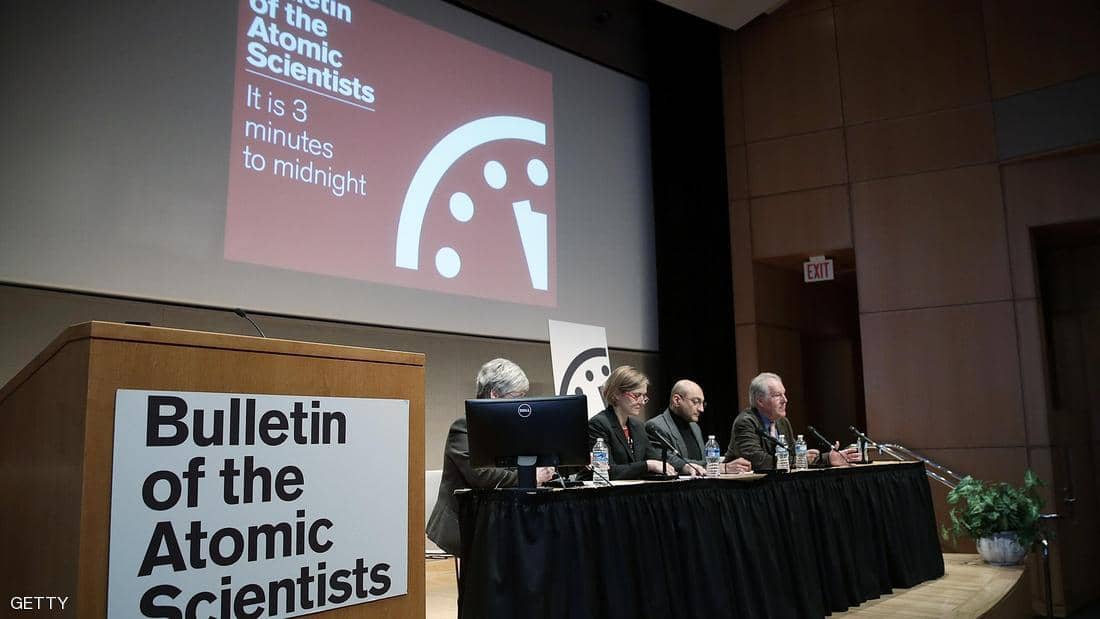 The risk of the world collapsing due to nuclear weapons and the climate crisis has reached its maximum.

According to US scientists and officials, who described the current environment as “largely unstable”.”.

Scientists and officials have said that the proliferation of “misleading information campaigns over the Internet” increases the threat of nuclear weapons and climate change, by preventing the public from insisting on progress..

The Bulletin of the Atomic Scientists announced that Scorpio”The Doomsday Clock” Avatar, has moved and is just 100 seconds from midnight, or” end”It is the closest to the catastrophe, since its inception in 1947, the beginning of the Cold War.

The farthest recorded distance of an hour from midnight on “Judgment Day” was 17 minutes, after the end of the Cold War.

“The world needs to wake up. Our planet faces two existential threats simultaneously,” said Mary Robinson, chair of the Independent World Leaders Group, a former envoy to the Commission for Human Rights.”.

Robinson, the former president of the Republic of Ireland, added that countries are not aiming to reduce greenhouse gas emissions that heat the planet, and instead rush to exploit fossil fuels, to pass a “death sentence”.

She added that the popular pressure represents a “fragment of hope” regarding the climate change crisis, but there is no such pressure on leaders and leaders to avoid nuclear threats, noting that as long as nuclear weapons available, so it is inevitable to use it one day “by chance, miscalculation or design,” according to the Guardian newspaper..

For his part, President of the Security and Science Council said in the bulletin, Robert Rosner, that society has developed a very dangerous world, and that the “information wars” undermines “the public’s ability to sort out what is real and what is invalid.”.

This warning comes at a time when the pursuit of limiting nuclear weapons is in imminent danger.

The Treaty on Medium-Range Nuclear Forces ended in August after the United States accused Russia of fraud, and US President Donald Trump announced that he would abandon the 1987 treaty entirely..

And while nuclear war continues Pose a threat, the climate crisis continues to intensify, as the Trump administration withdraws from international climate efforts.

Last year was the second warmest year ever recorded on the surface of the earth, as the temperature rose by 1.1 degrees from the average between 1850 and 1900, that is, before the increased use of fossil fuels.

“If the Earth warms, according to what we tend to think of as just a few degrees, and human life is paid,” said Sivan Kartha, board member and chief scientist at the Stockholm Environment Institute .

The planet to the opposite of the ice age or even pushed the climate halfway there, we have no reason to trust that such a world will remain a host to human civilization.”.

“The Trump administration’s contempt for expert opinions threatens any action on climate change and a host of other science-based issues,” said Robert Latif, board member and retired US Air Force general.”.

Latif pointed out that new technologies and developments, with “fake” videos, to serious pathogens and artificial intelligence can all threaten world peace ” The fragile”.

What if ... the sound is traveling in space?

The Future of Fuel Technology - What Will Power Next-Generation Cars?